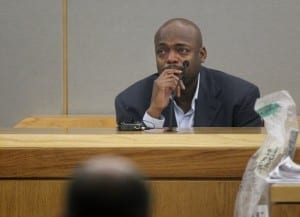 Former NBA player Nick Van Exel sat motionless as a Texas jury handed down a 60-year prison sentence to his son on Friday in connection to the shooting death of a longtime friend.

Nickey Maxwell Van Exel, 22, received his punishment after he was found guilty of murder on Thursday for killing 23-year-old Bradley Bassey Eyo. The younger Van Exel fatally shot Eyo in December 2010 and dumped his body in Lake Ray Hubbard on the eastern outskirts of Dallas.

Van Exel’s attorney claimed that his client and the victim were playing with a shotgun at Nickey Van Exel’s residence and that he didn’t know the gun was loaded.

But according to Dallas prosecutors Elaine Evans and Josh Healy, Van Exel killed Eyo because he was planning to tell authorities about robberies the two men had committed in Houston in 2010.

Eyo was charged in connection with the robberies, but police were unable to charge Van Exel because they did not have enough evidence against him, according to The Dallas Morning News.

Prosecutors were initially seeking a capital murder conviction, which would have carried an automatic life sentence. Nickey Van Exel will now be eligible for parole in 30 years with the murder conviction.

His father, Nick Van Exel cried when he took the witness stand before the jury delivered the punishment on Friday. While he was on the stand he apologized to Eyo’s family by making eye contact with them.

“I’m really sorry to the Eyo family,” Nick Van Exel said. “Nobody should have to go through something like this. Nobody.”

Nick Van Exel is currently the player development instructor for the Atlanta Hawks, but played 13 seasons in the NBA including stints with the Dallas Mavericks and Los Angeles Lakers. He even recalled a game that his son and Eyo attended during the 2006 NBA Finals in Miami, between the Heat and Mavericks.

The high emotions in the courtroom were expressed by Eyo’s mother, Eunice Okwe-Eyo, who had strong words for Nickey Van Excel, as he sat without reacting.

“You were like a son to me,” she said. “Nothing will bring my son back, but I know now that you are going to jail. You think about what you did and all the pain you have caused everybody.”

← Prev: A small measure of justice for Dallas scooterist Roy Salinas Next: Victim’s mother after Madison High basketball star gets probation: 'This is not justice' →